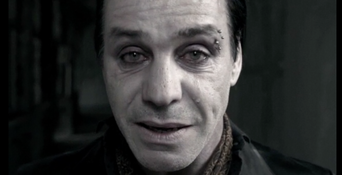 Grief in the storyteller’s expression
A dramatic shift in the narrative occurs in the piano edit version of “Mein Herz brennt.” I’ve chosen to situate the piano edit after the video edit. Doing so creates a specific narrative, one that I discuss in this essay.

Regarding the video edit, I point out that the storyteller’s persona occupies an immortal space. He doesn’t age, while the caretaker and children do. He displays no joy or glee as he terrorizes the children or as he torments the caretaker. However, in one stark  closeup, the viewers see grief in the persona’s expression. As he sings, thick tears flow from his eyes.

His impressions, formed by the tempered grief that becomes more pronounced as the video progresses, imply that this storyteller is the creature that feeds on children’s tears and that, perhaps, his immortality has become burdensome. The lack of joy and his methodical gait as he pursues the caretaker suggest he is simply doing what he must do. He is simply performing horror for that is his role. While Noël Carroll defines horror as a genre that represents “unnatural, [and] threatening monsters” (qtd. in Nickel 25), Phillip Nickel puts forth a two-pronged approach to horror: one is that horror does not necessarily have a specific monster and the second is that horror also encompasses “‘realistic’ monsters” (25).

As I discussed in my video, The Call for the Study of Horror in the Rhetorical Canon, because of horror’s resonating imagery, whether such imagery is crafted through print, visual, or auditory methods, or in a hybrid intermediated fashion, horror allows us the space to further connect with our own moral compass. To paraphrase Nickel, horror allows us to become sensitized to others’ emotions and existences, to others’ fears and desires, and to others’ humanity. Based on his aggrieved appearance and methodical and heavy gait, the storyteller in the video edit version of “Mein Herz brennt” seems to be growing tired of his function to terrorize children and the female caretaker. Of course, his lumbering gait could merely be his modus operandi, yet another tool in his arsenal to invoke terror in his audience. But when taken in conjunction with his forlorn expression and the tears he lets slip as he sings, “Sie kommen zu euch in der Nacht / Dämonen Geister schwarze Feen / sie kriechen aus dem Kellerschact / und werden unter euer Bettzeug sehen,”(6)  his deliberate use of his body and the way he moves his body in the space of the increasingly derelict building suggests that he is, in fact, wearying of his responsibility to terrorize. Thus, this particular monster is imbued with a sense of humanity, a sense of frailty. 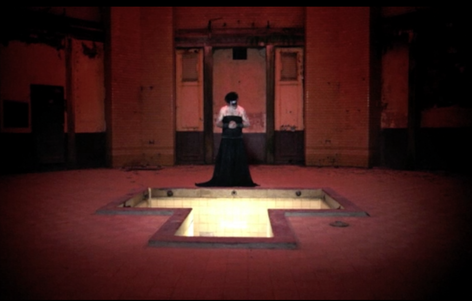 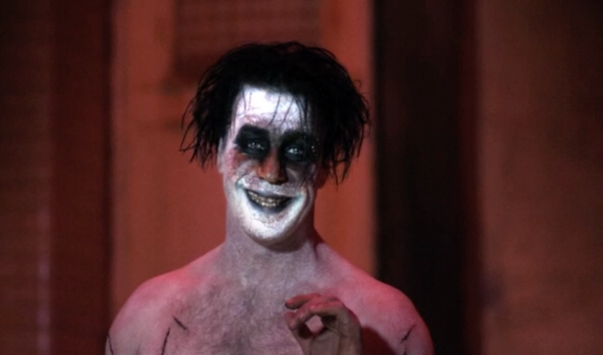 The piano edit version’s storyteller
Instead, there is only the storyteller’s sonorous voice intoning the same invitation to dear children to listen while Lorenz creates a simultaneously forlorn and regretful cadence. Lorenz’s staccato-like plucking at the keys coupled with the alternating rolling lower-registered notes and the sharply detached higher-registered notes create an auditory disconnect between the typical smoothness of a piano and the storyteller’s visibly discordant visage. Lindemann’s cut up body, grotesquely-painted face, disheveled hair, and the strange dress-like garment, complete with fishnet fingerless gloves, suggest an instability within the storyteller. This evocation of madness is the culmination  of the decline or shifting of monstrosity. Another way to look at this evolving storyteller is that his monstrosity has transformed. From the video edit version’s storyteller who stalked the caretaker, kissing the older version of the caretaker as she dies, thereby suggesting the interconnection between horror and eroticism, to the piano edit version’s storyteller who is more somber, the narrative of the storyteller is one of change. There is some form of agency, of dynamism, of what Gilbert Austin states as “passions,” for when the speaker (storyteller in the videos) “appeal[s] to the passions of the audience, he will himself be excited, and the interest he feels, however rapidly he may proceed, will … [arise] in his mind [and] will instantly be seen in his countenance, and first in his eye…[with] suitable gestures follow[ing], and … the words find[ing] utterance” (Austin qtd. in Hawhee and Holding 288). In the piano edit version, as the storyteller sings of the creatures injecting the children’s tears into his cold veins, Lindemann accentuates the words “kalten Venen” (cold veins) by tapping on his left forearm. This passionate display suggests such transfusion no longer occurs and that he is, in fact, reminiscing about when he would feed off of the children’s tears. He is now alone and abandoned. The passions of both video storytellers form one passion that is based on horror, revulsion, dread, fear, or “startlement” in both levels of the viewership: the children to whom the storyteller sings and the videos’ audiences (Nickel 24). 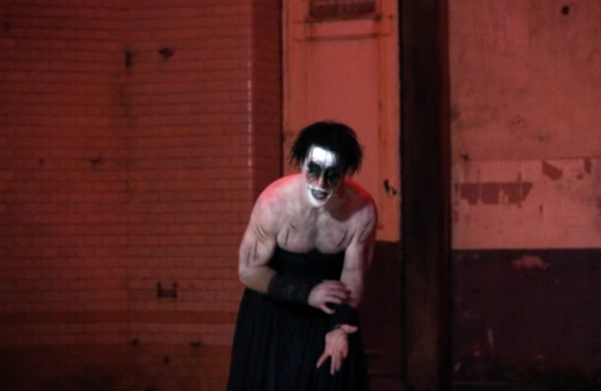 Physical articulation of lyrics being sung
While the piano edit version is also filmed at the Beelitz-Heilstätten building complex, the setting is limited to a very large bathroom with an enormous X-shaped underground room. There is no interaction with other residents of the Heilstätten; there is only the storyteller engaging with the camera. While the video edit version features sharp and fast juxtapositions of scenes and images, the piano edit version appears to have been filmed at a faster speed and then slowed down on playback. The resulting effect is a haunting slow disengagement with reality. This filmic strategy increases the suggestion of a lurking madness. This cæsura, this pause between the film’s speed and what the viewer’s eye sees is the space that “establishes the distance between reason and non-reason” (Madness and Civilization ix). Herein and with the overall tone of the piano edit version lies “reason’s subjugation of non-reason, wresting from it its truth as madness” (ibid). From the video edit version that constructs the storyteller with agency and as a, perhaps, no longer enthused, even tired, creature unable to enjoy stalking its victims to the piano edit version that constructs the storyteller/creature as abandoned, even forgotten, in a derelict building, and intersecting madness, the two video versions of “Mein Herz brennt” craft a narrative rooted in horror. The realistic monsters of abandonment, being forgotten, loss of control, madness—even the quotidian experience of many: no longer taking pleasure in one’s job—are explored in these videos. And these are very horrific realities.

In the next section, I offer closing thoughts on the function of horror and our need to study it.

(6) “They come to you in the night / demons, ghosts, black fairies /  they creep out of the cellar shaft / and will look under your bedding,” translated by Jeremy Williams and found at Herzeleid.
​
(7) At the end of the video edit version, some of the children, now grown men (played by the members of Rammstein), have escaped their cells and set fire to the building.
The Rhetoric of Rammstein by Lisette Blanco-Cerda is licensed under a Creative Commons Attribution-NonCommercial-NoDerivatives 4.0 International License.